Choose which Workshop(s) you want to join the waiting list for. When registration for that Workshop opens, we'll send you an email so you can save your seat.

How is the Problem String facilitated?

Problem Strings are facilitated by the teacher by asking each problem, one at a time. Students work to solve the problem, the teacher calls on individuals to answer, and the teacher models (represents) student thinking on the display. Scaling strategies can be represented with arrows. Be sure to keep the arrows consistent. If you are doubling from 10 to 20, the arrow should point from 10 to 20 and note ×2.

How does the teacher know who to call on?

If the question demands some think or work time, the teacher circulates to see what students are doing or to ask students what they are thinking. If the teacher cannot see or hear the desired strategy(ies) quickly enough, the teacher can ask a question that draws out that strategy. Questions like:

Did anyone use the 10 workers to get to the 40 workers? Did anyone do something multiplicative?

How do students indicate they are ready?

The teacher models and requests a private response signal. Students using a private response signal allow their peers enough work time, are not distracting other students, and give the teacher valuable information about who is done and who needs more time. In the video, Pam verbally requested a private signal, "Give me a thumbs up when you think you know..." and she physically demonstrates the signal by holding her thumb up as she asked questions.

This next set of moves is unique to this Problem String and is good for beginning facilitators to consider.

This Problem String is set in a context, the time it takes a number of workers to clear an orchard. Why a context? How important is it to stay in that context?

In a Problem String that is set in a context, introduce the context and then keep referring back to it. When students say things like, "Double 20, so halve 6," you can reply with, "Ah, so if you double the number of workers, that makes sense that you halve the time it takes to get the job done." The context can help students realize what they are doing. This is especially important if students are thinking additively.

For example, if a student is trying to find the time it takes 10 workers they cannot "double the 10 to 20, so double the 6 to 12", so double the workers takes double the time. If they halve the number of workers (from 20 to 10), then the time it takes to do the job is twice as long (from 6 hours to 12). Staying in context now helps establish a base you can lean back on, and come back to later when students are dealing with inverse variation and  tables that are not in context.

How many strategies does a teacher ask for/represent for each problem during the string?

This Problem String is a concept/big idea building string—it's purpose is to build the sense of inverse variation in a table, that the number of hours varies inversely proportionally to the number of workers. The emphasis is on sense making. If you have more people, you can get more done in the same amount of time. If you have fewer people, you can get less done in the same amount of time. However, in this scenario, the amount to get done is fixed, the orchard needs to be cleared, the whole orchard, all completed. The time it takes to complete the job is what is varying.  This sets the stage for students to use already obtained entries to find others. Through the rest of this Problem String, take multiple strategies because that will help students get used to the inverse relationships. The purpose is not to build a certain strategy, so don't focus on any certain one. Instead focus on the scenario and the inverse variation, by asking for and representing different strategies.

Since you are representing multiple strategies for each problem in a table, the board (display) can get very busy. Plan strategically at which points you will erase scaling marks so that students can focus on the relationships being used, but they can also focus on the values in the ratio table as needed.

How did Pam handle the initial confusion?

The Problem String introduces a context that students are not familiar with. This is the first time that they have considered an inverse variation scenario. Pam lets them struggle. She pushes up against their ideas. She doesn't let them push her for a top down answer.

At the beginning of the Problem String, Pam asks the first question, "Given 20 workers take 6 hours, how long will it take 10 workers?" It then takes several minutes of students talking to a partners and the class talking, before Pam says, "Go back to the 20 workers. When the 20 workers got it done in six hours, how much did 10 workers do?"  This helps focus the question and prompts a discussion where Vivanie says, "The less workers the less, I mean, the more hours and the more workers, the less hours." Pam confirms that most students are good with that generalization, but they are still not quite sure how many hours it takes 10 workers. Pam decides to move on to the next problem: "I wonder if we could do another one. What if I said to you that we know that there's 24 hours until there's a hard freeze, and I don't know if you guys know, but when it freezes, then you lose all of it. The fruit rots. It's not good, can't sell it. So I know I have 24 hours, but I'm cheap. I got 24 hours to do it. I don't have just six hours. I have a whole day of 24 hours to do it. I want to only hire the number of workers I need."

Moving on to the next problem is a bold move and Pam is betting that getting more of the scenario on the table will help students confirm their beginning theories.

Pam hears students making conjectures about adding 6 and 3, but because the students are reasoning with naked numbers (not in context), their reasoning does not fit the scenario. To encourage them to use the context to help, Pam says, "So I hear you saying six and three but not six what and three what. So I want you to stay in workers and fields." Then she goes to the board and draws the "orchard". 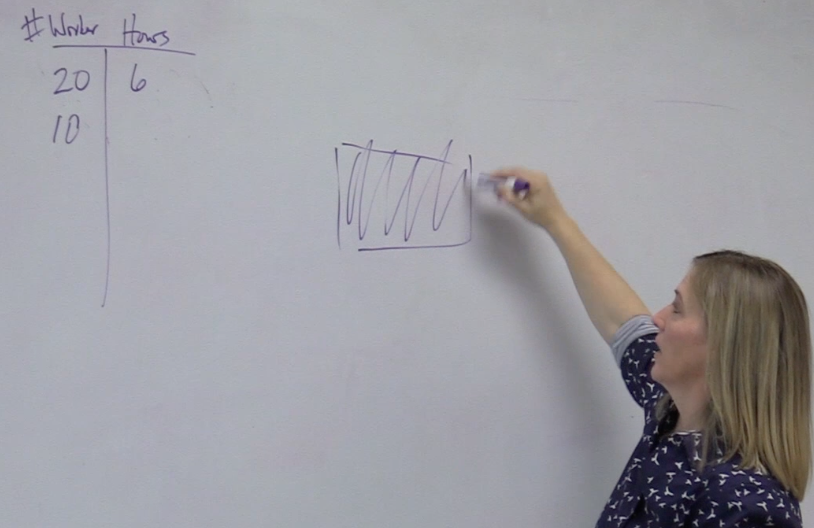 The detail of the drawing is less important then the fact that it represents the whole field. This problem is not about getting half of an orchard cleared. It's always the number of workers and time it takes to clear the WHOLE ORCHARD.

Pam says things like the following to help students stay in context: "So I hear you, but when you guys are talking, I don't hear workers" and "Six, six what, six what?"

This final set of moves is more fine grained and nuanced.

How did Pam begin to build a culture of thinking and reasoning rather than mimicking?

Pam starts the string with reminders about writing or not as a reminder to not get into the mode of just copying stuff down. She also makes it clear that students' thinking and reasoning is valued.

How does Pam use the natural complexity of the math to bring the disequilibrium to the forefront so students can talk about it and work it out together?

Pam asks students to weigh different answers against each other and discuss their reasoning. Here are some examples:

Why did Pam move on before students settled on an answer to the first problem?

At this point in the Problem String, Pam moved on to see if the next questions would help.

"So we still have 12 and nine? Okay, cool, I wonder if we could do another one. What if I said to you that we know that there's 24 hours until there's a hard freeze?"

Students had experienced the "Sticks of Gum" ratio table Problem String the day before. Because we were going to video the next day, I chose the "Sticks of Gum" Problem String because it is a really good string to get students talking and reasoning. This also had the effect of helping students move from additive thinking to multiplicative thinking. But, now students are also playing with the idea of splitting the difference, which works when the scenario has a constant rate of change, one pack has 17 sticks so 17 sticks per pack. If you know that 2 packs have 34 sticks and 4 packs have 68 sticks, you can reason that since 3 packs is exactly in the middle of 2 and 4 packs, then we can find the exact middle number of sticks between 34 and 68 to find that 3 packs have 51 sticks. This scenario can be represented by y = 17x, where y is the number of sticks in x packs.

Indeed, moving on to the next problem did help students to make sense of both the multiplicative and also the inverse nature of the situation.

More about this Problem String 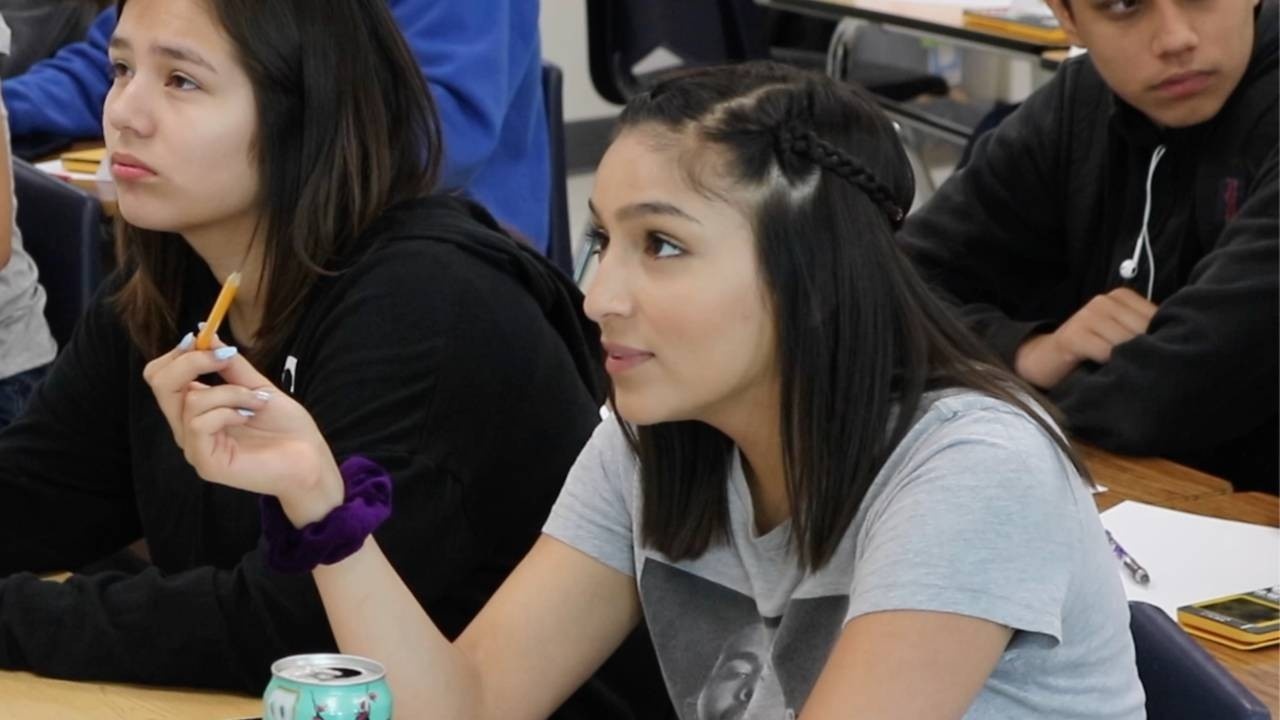 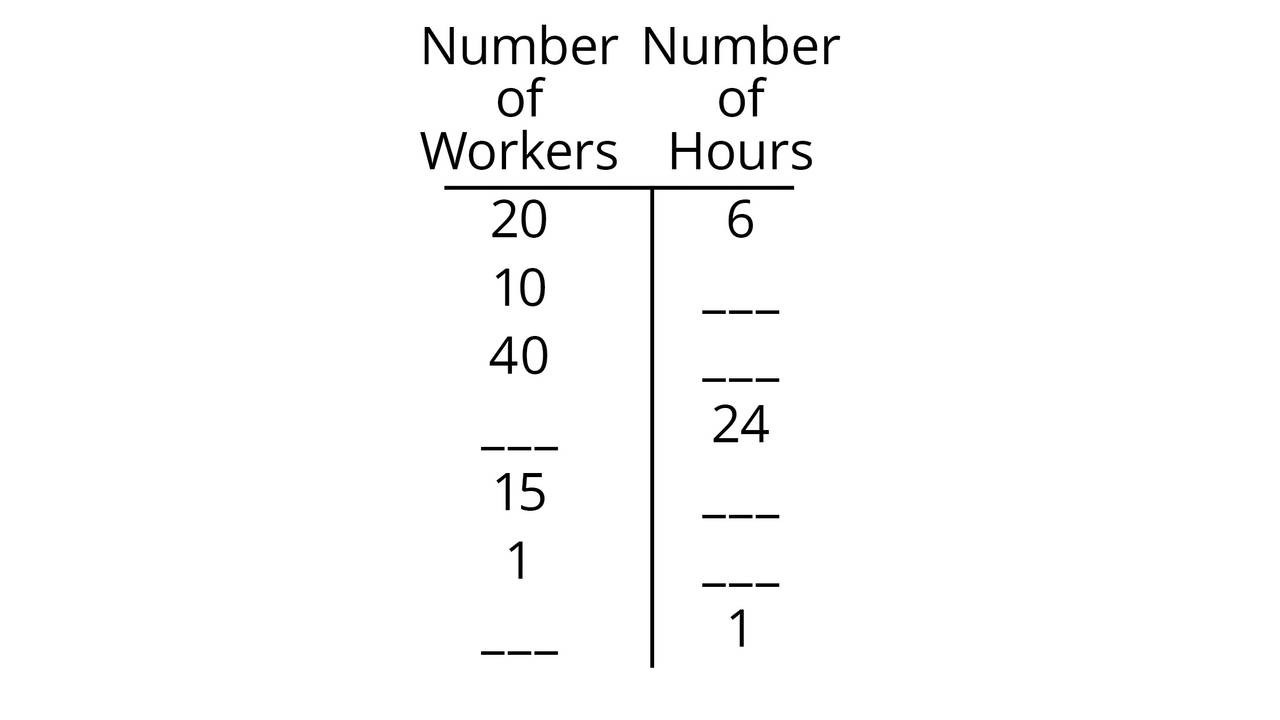 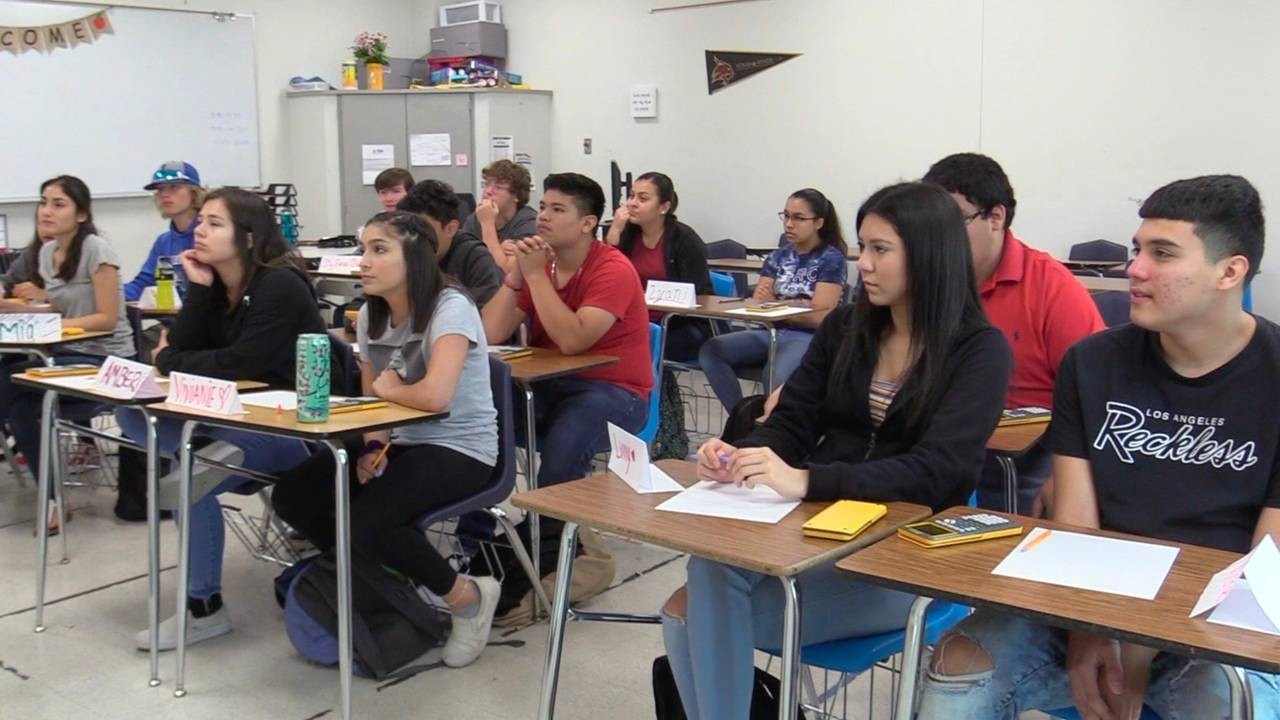 About the Mathematics and Structure